The SENSoR Project across 14 countries of South East Europe was the world’s largest transnational road infrastructure safety project. It ran for 2 years from September 2012 to November 2014 and brought together Greece, Slovakia, Hungary, Slovenia, Republic of Moldova, Serbia, North Macedonia, Bosnia and Herzegovina, Croatia, Albania, Montenegro, Bulgaria, Romania and Ukraine. This EuroRAP project built on the outstanding cooperation between automobile clubs, universities and road authorities, and was co-financed by the South East Europe (SEE) Transnational Cooperation Programme.

Within SENSOR, road surveys of the safety characteristics of roads according to the EuroRAP protocols were performed for 19.315 km of roads in 14 countries of the South Eastern Europe. The hard work had been done in cooperation with the RAP accredited supplier and was technically supported by the Road Safety Foundation (UK).  In total 5 survey teams collected data for more than 15,000km of roads, 52 risk attributes have been collected and coded for each 100m of 20,000km carriageway lengths – the total work included analysis of 10 million data points! 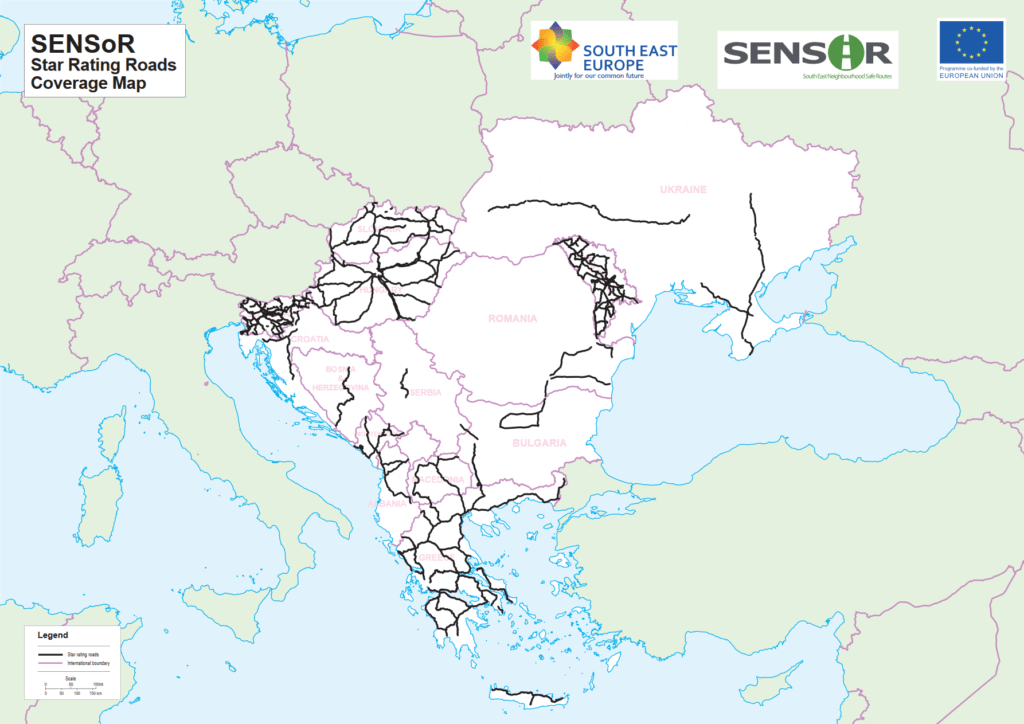 Typically, the Star rating results in surveyed South East Europe countries  show amongst others that:

Raising the safety standards of the networks inspected can be achieved with on-going maintenance, specific accident reduction programmes and road rehabilitation. Within SENSoR project the Safer Roads Investments Plans for each country surveyed had been developed based on the cost/benefit ration. The cumulative results show, amongst other, that:

The  SENSoR road safety in the SEE activities included also work on the assessing travel risk on the network.  The Risk Maps present the risk of fatal or serious injury to individual road user as they are travelling on the road network. This is calculated from the traffic on each section and the number of fatal and serious crashes that is the fatal and serious injury crashes per km travelled.

This risk is divided into 5 easily understandable bands, from green representing low risk, to black representing high risk. These bands are then plotted on map to allow comparisons of road safety performance on both a national and transnational basis.

Risk Maps produced in SENSoR describe individual travel risk for more than 27.000 km of roads in South East Europe. With significant differences between countries, they show on the cumulative level that 30 to 60% of roads are high risk roads.